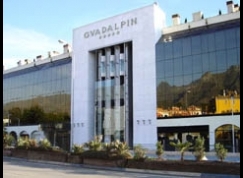 The rooms in the hotel are privately owned.

The Hotel Guadalpín, a symbol of the corruption in Jesús Gil’s Marbella, has been closed yesterday on the orders of the judge after a long legal process which was accelerated two years ago when the hotel’s owners, Aifos, applied for bankruptcy protection.

President of the company committee, Susana González, told El País that ‘it is a very sad day, but on the other hand we feel somewhat freed’ referring to the enormous difficulties and sacrifices seen by the 129 workers.

The rooms at the Guadalpin are privately owned, while Aifos is the owner of the public spaces.

The hotel was built without a licence, and there are allegations that backhanders were paid, those claims are being investigated as part of the Malaya case.

Marbella and Costa del Sol Hotels closing for the Winter