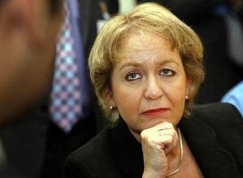 
The British government is finally doing something to support British citizens in Spain, putting pressure on Spain to find solutions to the illegal building problem

Local Government Minister Rosie Winterton has welcomed progress to give better protection to UK citizens living in or considering moving to Spain and pressed the Spanish Government to seek long-term solutions to the current property problems faced by some UK citizens.

Ms Winterton met with Manuel Chaves, Spain’s Third Vice-President and Minister for Territorial Policy, and Gaspar Zarrias, Spanish Minister of State for Territorial Affairs, to discuss the property ownership problems some UK nationals are facing in Spain despite purchasing homes in good faith.

Ms Winterton welcomed, as a positive first step, agreements, announced recently by Mr Zarrias and Chis Bryant that will be signed between the UK and both the Junta de Andalucia and the Valencian Regional Government for a regional civil servant from each of the two regional governments to advise UK citizens on integrating into Andalucia and Valencia.

They will give local, informed advice to British citizens in these regions, on a range of issues such as purchasing property, registration with local authorities, and healthcare coverage in Spain.

But Ms Winterton also made clear the importance of finding long-term solutions to help those facing difficulties at present, to ensure that nationals living in or considering moving to Spain feel better protected.

“The agreement is a positive first step and such innovative co-operation is certainly the way forward. Having regional civil servants in our consulates to advise UK citizens will help people to feel reassured and better protected.”

“But we remain absolutely committed to working with the Spanish Government to find long-term solutions to the problems currently faced by those who bought property in Spain in good faith.”

“I met with Gaspar Zarrías, Minister of State for Territorial Affairs, and Juan Espadas Cejas, Consejero de Vivienda y Ordenacion de Territorio at the Junta de Andalucía at the British Consulate in Malaga earlier this month to announce the appointment of these two Spanish civil servants. I’m fully supportive of Rosie Winterton’s work in this area to ensure that the British Government does all it can to help British citizens affected by this issue.

“I would advise people to be extremely careful with property purchases overseas. Through our Travel Advice we suggest that prospective buyers seek independent legal advice and contact relevant local associations of those affected by property problems.”