The 10th edition of The Global Gift Gala Marbella a Magical Night to Remember, Gallery 2022
Property

Bargains to kickstart the market? 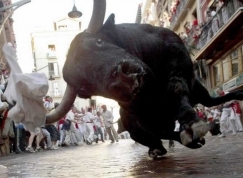 Will sales in Pamplona see the return of a Bull market?

Some Spanish property analysts think that the market is coming back to life because banks are dumping their stocks of property with big discounts.

In just 3 days La Caixa – Spain’s largest savings bank –  sold 35 flats in Pamplona offering discounts of 25% ,  La Vanguardia reported. “Not even in the best of times before the crisis did this happen to me, selling homes like hotcakes,” an agent responsible for La Caixa’s sales in the region told La Vanguardia. And during the ‘low cost’ property exhibition in Madrid, La Caixa’s property division sold 120 flats out of a promotion of 140 in Vallecas (Madrid), to make a total of 400 homes sold in 2 weeks.

With 4,000 properties for sale, 2,400 available through its website, Altamira – the real estate company of Santander, Spain’s largest bank – sold 24 flats in Madrid in one day, and 41 in just 2 weeks in Cordoba. And Caixa Catalunya, a savings bank based in Barcelona, has disposed of 1,224 homes this year.

Now that they are Spain’s biggest property companies, thanks to reckless lending to developers who swapped their debts for property when Spain’s property market crashed, most of Spain’s banks and savings banks have geared up to sell the properties building up on their balance sheets, most of which cost between 100,000 and 230,000 Euros.

Hardly a day passes without the developers accusing the banks of unfair competition for giving better financing terms to their own clients. “That’s not what gives the banks an advantage,” Julían Cabanillas told La Vanguardia. “What’s happening is that the supply is beginning to adjust to demand in terms of prices.”

Another problem for developers is that many of the properties the banks are offering at discounts are on projects the developers are still trying to sell themselves.

But Pol Clota, sales director at Procam, Caixa Catalunya’s property division, warns that banks might be selling too cheap. “Selling developments in a few days is the same as giving them away or that prices are scandalously cheap,” he told La Vanguardia.