Arab-Russian boost for luxury property on the Costa del Sol 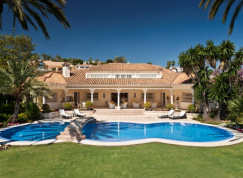 
Russian and Arab investors are ‘saving’ the luxury property sector on the Costa del Sol, purchasing homes in the €4 million to €10 million price rang.

This was revealed by Ricardo Arranz, President of the Andalucian Developers and Residential Tourism Federation, who explained that the Russian and Arab markets are showing great interest in the area, and that the Chinese market is also picking up.

Important people such as Qatari ministers and ambassadors are visiting the area, and finding that they like it, which encourages them to buy here rather than in the UK or France, he said.

Most of them have high spending power, with money to invest in local projects.

He said that banks are currently selling houses worth €600,000 with 50 per cent discount, most of them between Marbella, Estepona and Benahavis, attracting investors, and also pointed out that “the only positive thing about legal scandals such as the ‘Malaya’ and ‘Ballena Blanca’ cases is that available houses are becoming scarce in Marbella and more need to be built, which will create employment”.