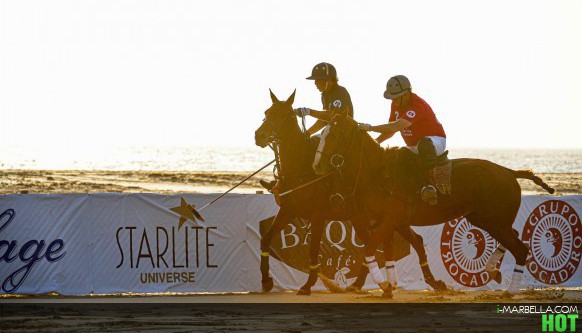 
The Trocadero/Baque team, whose professional polo player is the famous Álvaro Muñoz Escassi, has achieved on September 15, 2019, the victory in the final of the VI edition of Tarifa Beach Polo, a Tournament that means for three years also obtaining the title of the Andalusian Championship of Beach Polo in Spain.

The championship has been disputed during the weekend in two days of competition, Saturday and Sunday, which have achieved the attendance of dozens of people who have been able to enjoy a time conducive to the practice of a very novel modality of this sport, introduced in Spain through Tarifa by Isabel de Borbón.

The final took place on Sunday with the victory of Trocadero / Baque against the team of Hotel Los Lances, which has achieved the second position.

In third place was the Perlage, the first team exclusively female, composed of a French patron and professional polo Alicia Garriador, who played this summer in the team of Brunai de Sotogrande.

Finally, the fourth position, with very closed results, was for the team of Scapa.

The tournament took place in Los Lances Beach, in front of chiringuito Carbones 13 beach bar, and around thirty horses participated in it, offering a very visual and attractive spectacle for the public.

In this way, Tarifa Beach Polo has already consolidated itself in the international polo scene and is a reference point for an innovative modality in Spain, sponsored by the Andalusian Polo Federation and respected by the rest of tournaments and clubs.

Tarifa Beach Polo has been a personal initiative of Isabel de Borbón, player and fan of this sport, which has imported the modality from the United States: "It occurred to me because I was living for a while in the United States, and there is very popular the Miami Beach Polo, which has more than ten editions, and it is a very nice and different event that people like very much.

The modality of sand polo is a recent trend within the sport, which is played on a smaller track, but also closer to the public.

Isabel de Borbón chose Tarifa six years ago to launch this event, because, in her words: "Tarifa is the best beach I know, many places I've been, and also has the ideal conditions, because it has a very compact sand due to the tides that come and go, and that's ideal for horses.

This beautiful sport has already managed to establish itself in the Marbella public, stay tuned with us to learn more about it, its evolution and the events that are coming in our city.

Be seen! Be visible! I-Marbella.com

Be part of Marbella's past, present, and future!

Leave your mark on the fascinating and spectacular history of our city!