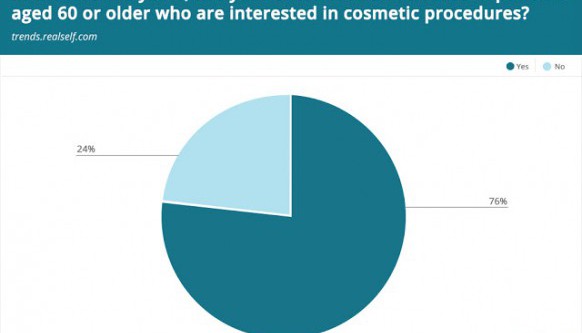 Over the last 50 years, life expectancy in the EU has increased by 10 years – on average, people are now expected to live to 80-years-old. Not only are they living longer, they're enjoying better health and mobility than ever before.

Because of this, members of the older generation increasingly want to look as good as they feel, and this is fuelling a rise in demand for cosmetic procedures.

A survey by website RealSelf reveals that 76% of surgeons have witnessed an increase in patients over the age of 60 in the last five years. This trend is echoed by the website's own data, which shows that in the last year alone, roughly 2 million people aged between 60 and 90 have researched a cosmetic procedure.

It's no surprise that this demographic is mostly interested in anti-aging facial treatments such as facelifts, fat grafting, fillers, Botox, and eyelid surgery to remove bags and droopy skin.

But it's not just their faces they're looking to rejuvenate; also popular are breast augmentation, liposuction, and tummy tucks. According to the survey, both women and men are seeking out surgery.

Ocean Clinic Marbella treats a high percentage of older patients, due to Head Surgeon Dr. Kaye's reputation for facelifts. Indeed, it is our most frequently requested treatment.

Dr. Kaye has developed his own facelift technique, which has gained much interest in the medical community and led to him being invited to demonstrate it to peers around the world.

Says Dr. Kaye: “The older patients I see are vibrant people still living life to the full, so they want to feel good about the way they look.

“Some of them are divorced or widowed and on the dating scene once again, or maybe they're with a younger partner. This can make them more concerned about their appearance, but it's not just this driving the increased demand.

“Other factors include the extra disposable income the ‘baby boomers’ have and the reduced stigma around cosmetic surgery we’ve seen in recent years.”

According to the research conducted by RealSelf, 80% of surgeons say their older patients have simply decided it's time to do something for themselves, now that their children have left home and they have possibly retired.

However, 30% report that staying competitive in the job market is also a driver for older people undergoing cosmetic surgery. Statistics show that almost 20% of Americans aged 65 and over are still working (this figure has almost doubled since the 1980s).

“For those who don't wish to retire at 65, competing with their younger counterparts means they need to look as capable as they are. We can help these patients maintain their confidence and presence,” says Dr. Kaye.

Older patients are generally thought to be a higher risk category than younger patients, primarily because they are more likely to have medical problems such as high blood pressure and heart problems. They are also more likely to be taking medications that could impact on the outcome of the procedure.

That said, all patients need to be in a good state of health before undergoing cosmetic surgery. At Ocean Clinic Marbella, we routinely conduct blood tests, blood pressure readings, ECG tests, and a full medical history survey prior to offering treatment.

If you are in a generally good state of health and fitness, there's no reason you should not be able to have surgery – whatever you age. A study conducted by the Cleveland Clinic in the US backs this up.

The study reviewed 216 facelifts performed by a single surgeon over a three-year period. Patients were divided into two groups, younger than 65 years (148 patients) and 65 years and older (68 patients).

The research took a number of variables into consideration, including operative details, co-morbidities, and overall health status. When this information was combined with statistical analysis, the study found that if elderly patients were properly screened prior to the surgery, they had complication rates comparable to those of younger patients.

It concluded that age was not a determining factor of success or safety in facelift surgery. The most important consideration is having good health prior to surgery.

“Just because a patient is older doesn't mean they're in bad health,” says Dr. Kaye. “If you're an older person considering cosmetic surgery, the best thing is to make an appointment for a consultation with one of our doctors who will be able to assess your suitability.”