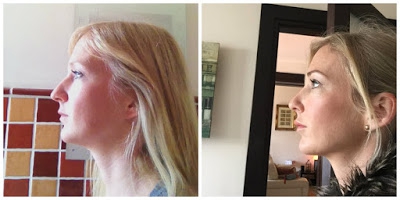 In my last blog, I documented my experience of checking in at Ocean Clinic Marbella to undergo four separate procedures (rhinoplasty, blepharoplasty, abdominal lipo, and fat grafting to my face and lips). Now find out how my recovery went and what I thought when the bandages came off!

I had been surprised at how little pain I'd experienced post-op in the clinic. I'd felt amazingly good, all things considered, but when I got home, I started to feel much groggier. It took me a while to realise that was because I no longer had the IV in my hand delivering magic fluid!

For the first couple of days, I didn't want to do much more than watch TV or flick through a magazine as I was pretty low on energy. The most challenging aspect was trying to be a mum to my highly energetic three-year-old son, but my husband was great and did everything he could to help.

Thankfully, I didn't have any problems sleeping and by the weekend (I had my surgery on a Wednesday), I was feeling a lot better. I could breathe through my nose again, my eyes had stopped weeping and my energy levels had returned to normal. I even stopped taking my painkillers on the Sunday because I no longer needed them. And by Monday, I was back working again (I work from home so I was able to take less time off than most people).

Although I felt better, I didn't look great. Since leaving the brilliant ice mask behind at the clinic, my bruising had fully developed. I didn't really want to leave the house, but I did venture out to walk the dogs in the privacy of the mountains.

A few days later, I also braved the outside world to go to the hairdressers and get my hair washed. I couldn't have a bath or shower because of the nose cast and stomach bandages so I was feeling rather grimy. Dry shampoo, face wipes, and wet wipes are a must for anyone undergoing this type of surgery! Oh, and lots and lots of lip balm if you're having your lips done. Mine felt dry and numb for a good couple of weeks.

One week after my surgery, I was able to return to the clinic for my stomach bandages to be removed and have a lymphatic drainage massage with Ocean Clinic's lovely massage therapist Ana Rodriguez.

The purpose of the lymphatic massage is to help reduce swelling by moving waste fluids from the damaged areas. Ana gave me some special 'trousers' to wear that inflated and deflated to place gentle pressure on my legs. Meanwhile, she lightly massaged by stomach and face, periodically pressing on the lymph nodes in my collarbone to encourage the fluids to flush through my lymphatic system.

Afterwards, I went to see Dr. Kaye who removed the stitches from under my eyes. He was pleased with how everything was healing and agreed I could come in a day early to have my nose cast removed (I really wanted it off before the weekend).

When I got home, I was able to take a lovely long bath and then examine my tummy. I'd had fat removed from my lower abdomen and at the waist. It was still swollen but I could already see it looked flatter and smoother. Only two tiny incisions had been made; one in my belly button and one lower down below the line of my underwear, so there was no visible scarring. I was still a bit bruised and tender and my tummy felt kind of hard in places, but Ana had told me this would soften again gradually.

It was so exciting to see everything taking shape and getting better with each passing day, and I couldn't wait until Friday to get a first look at my new nose!

After nine days with no make-up, it felt great to put on some mascara again. I was still pretty bruised under my eyes so I did the best I could to cover it, and packed some dark glasses to hide them later.

Unfortunately, my husband was away for the 'big reveal', so I drove myself to the clinic and took my friend with me for moral support.

Removing the cast took only a few minutes. It was slightly uncomfortable as the nose was still very tender. Dr. Kaye said I had to be extra careful not to knock it for the next week and that it wouldn't be fully set until six weeks.

Soon I was able to take a look in the mirror. Although I was still bruised and swollen I could see my nose was smaller and more refined. The dorsal hump was gone, replaced with a perfectly straight profile and the tip had been reshaped too.

Although it was a relief to finally get the cast off, it almost felt like I was still wearing it and the tip of my nose was curiously numb – something Dr. Kaye said could take up to six months to return to normal.

I went to put on my sunglasses as I was leaving the clinic to cover the purple circles beneath my eyes, but Dr. Kaye said I should avoid wearing them until my nose was fully set. He also reminded me to wear high factor sunscreen to protect my skin, which would be hypersensitive for a little while.

I was, however, allowed to wear make-up to cover my bruises, so I nipped into the loo and slathered some on! Then my friend and I went to have a glass of wine to celebrate my new look.

Over the next week, my bruising continued to subside, and I kept applying my creams and taking my supplements to help the process. My nose was more swollen than it was immediately after I'd had the cast removed, because the pressure of the cast keeps it from swelling. My lips were also enlarged, because around 40% of transplanted fat is re-absorbed over the first three week.

However, with the help of some good make-up, I was able to get back to normal life and didn't feel too self-conscious. I returned to Ocean Clinic for another lymphatic drainage session, and this time Ana used a HF radiofrequency machine on my stomach to help soften up the firmer bits.

I was a bit concerned about the swelling under my eyes, but Ana reassured me that it usually takes four weeks for that to subside. I actually noticed a significant reduction in swelling after the facial massage, and I was booked in for another a week later, so I felt re-assured about the after-care process.

It's now two weeks since I had my cast removed (23 days since surgery), and nearly all my bruising has gone. I still look pretty dark under the eyes and they tend to be more swollen in the morning. My nose continues to take shape and my tummy and waist look great (I just need some bikini weather now!).

My lips have settled down, and I've been getting lots of compliments on them, and the fat I've had in my cheeks and marionette lines make me look younger and not so gaunt in the face.

Friends say the changes to my nose are subtle, but to me it's a big difference. My husband says my whole face is 'softened'. I know it will be a little while longer until I can see the end result of the surgery – healing takes time and cannot be rushed – and it's great knowing it's going to get a little bit more refined each day. I feel a little like a butterfly taking shape in a cocoon!

Overall, I'm so pleased I had the surgery. I've found it a really interesting experience and have been so well-cared for throughout by the team at Ocean Clinic. Now, I'm really looking forward to a big night out in a couple of months when I can let my new look take flight!