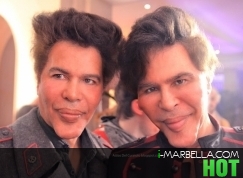 About thirty years ago they were the heart-throbs of French television with their own primetime series on science fiction. Now Igor and Grichka Bogdanoff look more like the alien life forms they used to report on. The twin brothers have had so much plastic surgery they are barely recognisable.

The Bogdanov brothers were born in 1949 in the Commune of Saint-Lary, in the Gascony region of southwest France.Igor and Grichka Bogdanov wrote a controversial series of theoretical physics papers that was widely published in scientific journals. Oh, and Igor and Grichka also have some of the worst plastic surgery you have ever seen.

The Bogdanoff brothers were very popular on French television during the 1980s, when their boyish good looks helped them secure a number of series on science and science fiction including the hugely popular Temps X. But in the 1990′s the Bogdanov twins underwent some plastic surgery and are now the proud owners of the most ridiculous chin & cheek implants. They have also had plenty of botox and fillers.  Their stretched faces remind the look of socialite Jocelyn Wildenstein, dubbed the 'bride of Wildenstein'.

What do you think of them?

VIDEO: See What Alcohol and Drugs Have Done to Lindsay's Face! (2)

Dr. Kai O. Kaye announces the completion of the extension of its surgical-medical unit