Bigger is Beautiful When It Comes to Buttocks, Survey Finds 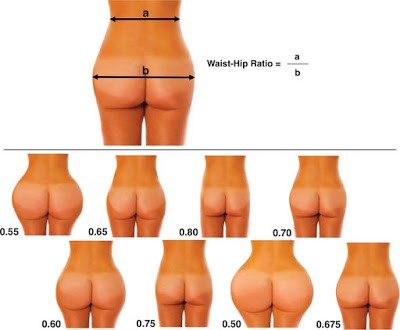 Ideals of beauty are changing. Where most women once aspired to a small, pert bottom now they desire a more voluptuous shape – and men do too!

Researchers at the Loma Linda University Department of Plastic Surgery in California conducted a study of more than 1,000 people to discover the ‘ideal’ shape and size for female buttocks in 2016.

In the past, a waist-to-hip ratio of 0.70 has often been cited as the ideal. This was based on the measurements of beauty queens and glamour models.

The second most popular ratio was even bigger – 0.60, chosen by 25% of respondents. Only 6% rated 0.70 (previously thought to be the perfect waist-to-hip ratio) as the most attractive.

The responses were analysed in terms of age range, gender, ethnicity, and nationality of the respondents, but preferences were found to be similar across the subgroups.

In addition to rating the appearance of buttocks from behind, the participants were asked to evaluate side views (lateral).

Looking at the buttocks from this perspective, the respondents showed a preference for more traditional ratios. Most chose a flatter profile, with a waist-to-hip ratio of 0.70 or greater.

Writing in the journal Plastic and Reconstructive Surgery, the researchers said:

"Respondents prefer a more dramatic appearance in the posterior view with a smaller waist and a larger and a more voluptuous buttock. However, in the lateral view, a less enhanced shape is preferred."

The aim of the study, according to its authors, is to help guide cosmetic surgeons as they experience increased demand for buttock augmentations (gluteoplasty).

According to statistics published by the American Society of Plastic Surgeons (ASPS), nearly 12,000 women underwent buttock enhancement in 2015 – an increase of nearly 30% compared to 2014.

The surgery can be carried out using either the patient’s own body fat, which is transplanted in the buttocks, or with gluteal implants. Ocean Clinic’s Head Surgeon Dr. Kaye has experience in both techniques. You can read more about how the surgery is performed here.

The treatment also includes liposculpting to contour the buttocks, with fat removed from the lower back and upper thighs to give the bottom more prominence and definition.

As more and more celebrities opt for buttocks enhancing treatments, bigger booties are expected to become increasingly desired. If you dream of a curvier silhouette, make an appointment to discuss your perfect proportions with one of our surgeons.