Behind the Scenes at Ocean Clinic Marbella - A Patient's Diary: Part One 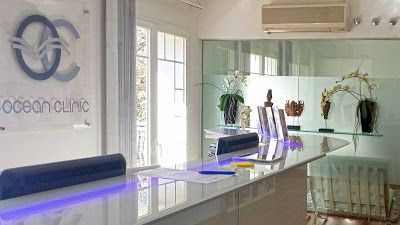 Have you ever noticed people entering through Ocean Clinic's discreet glass door (next to Holland & Barratt on Marbella's main high street) and wondered what goes on inside?

I went under the knife recently and, to offer you a glimpse behind the scenes, I'm writing a diary about my experience. Published in three parts, it will chart everything from my pre-op appointment and surgery, through to my recovery, and 'big reveal'.

I had a total of four procedures, performed together, including rhinoplasty, lower blepharoplasty (eye bag surgery), abdominal liposuction, and facial fat grafting, performed by head surgeon Dr. Kaye and his team in January 2016.

This was the part I was actually dreading the most because I knew I'd have to have a blood test. I know that sounds ridiculous when I was undergoing such extensive surgery, but there's something about the red stuff that just makes me go weak at the knees.

I needn't have worried, however, because Alexandra, the nurse, was brilliant. I told her I didn't like blood and she told me to just lie back and close my eyes.

“That's it,” she said shortly. It was all done, and I hadn't even noticed.

Alexandra also did an ECG test to check my heart, which involved placing some sticky sensors on my body, and didn't hurt one bit.

My pre-op appointment also included a meeting with the lovely Dr. Sonja Kästner, Ocean Clinic's new resident. She ran though a health questionnaire, which included questions about my medical history, height and weight, allergies and medications, and psychological state of mind (why I was having the surgery).

I was given written information about each procedure which I had to read – this took quite a long time because I was having so many! The documents set out the treatments and their risks. It was quite off putting to read about possible complications, but Dr. Kästner said although it was rare for things to go wrong, it was important to be fully informed.

The final thing we had to do was take my 'before' photos, so I could see the results post surgery.

So that was it; I was all ready to go. Clinic manager Vanessa gave me prescriptions for post op medications, told me to return at 8.45 a.m. the following Wednesday, and reminded me not to eat or drink after midnight the night before.

Having successfully got through the pre-op, my nerves about the pending surgery had largely dissipated, and now I was mostly just excited and counting down the days!

I had feared that I would be too nervous to sleep the night before my operation, but I actually slept well. I was lucky that I knew several people who had already been treated by Dr. Kaye and seen the amazing results, so my confidence in him was very high and this allowed me to relax.

The most unpleasant thing about the morning of the surgery was not being able to have my morning cup of tea, which wakes me up and gets me going, but I was soon out the door and on the road.

I had packed a small case with loose pyjamas (button-up, so I wouldn’t have to put the top over my head), a fluffy fleece, socks and slippers, my laptop loaded with a few movies, a magazine, my phone (upon which I had downloaded an audio book), a chocolate bar, and all my medications and supplements.

I had been taking vitamin C, zinc, and bromelin in preparation, and also acyclovir tablets as I'm prone to cold sores, which can be activated by facial trauma.

When I arrived at the clinic, I was taken up in the lift and shown to my room. It was very comfortable and modern – more like a hotel - with an en suite bathroom, flat screen TV, and large sofa for visitors. It was nice and warm too, so I didn't mind getting undressed and putting on the surgical gown, slippers, and hair net I had been given.

Ready for Surgery
Soon Dr. Kaye and Dr Kästner came to see me and we went over what I wanted to achieve. Dr. Kaye drew on my face and stomach with a marker pen and explained what would be done.

He asked me to smile so he could see the areas on my face lacking volume, where he would transplant some of the fat taken from my tummy – this included my lips and cheeks, and he would also put some in my marionette lines around my mouth to fill them out.

My nurse during my stay was going to be Marina, who really helped put me at ease and led me down to theatre. It was cold in the operating theatre, and initially I didn't like the idea of lying down on the table, until I was told it was heated. I was also covered with a blanket, so I was nice and cosy.

Besides the pre-op blood test, I was also anxious about having the IV put in my hand, but anesthetist, Dr. Escudero was totally charming and succeeded in distracting me with easy chatter.

“You'll start to feel a bit dizzy in a minute,” he said. I did, and then I was gone.

Don't miss Part Two to find out what happened when I woke up! In the meantime, if you're considering having treatment yourself, contact Ocean Clinic to book a free consultation.