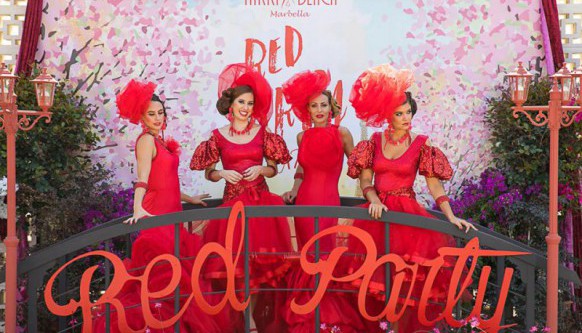 
On October’s first of 2017 the summer had to end and to say goodbye to this wonderful season the Nikki Beach Club of Marbella in Spain hosted its traditional Red Closing party filled with surprises, glamour and amazing entertainment.

Summer hasn’t ended in Marbella until Nikki Beach Club has its red party, and this year was charged with a lot of energy, good vibes, and visitors from every corner of the world.

During this party the show was given by amazing DJ’s along with dancers, live shows and performances, drummers and a lot of the most awesome fun and entertainment this club can offer that kept the party going from 13:00hs of October’s first until every guest was just too satisfied and tried to keep the party going.

Music shows came by the hand of powerful mix masters and artists like Djs Antonio and Dj Junior D’Acosta, English singer Nikki Pope and from 21:00h the famous Dj Tanja La Croix owned the board and kept the party going with her playlist of electronics.

Nikki Beach Club Marbella’s cuisine team kept it up to its name offering a tasty and awesome looking menu based on ingredients with a red color that delighted every single guest with gastronomic creations based mostly on lobster, tomato, shrimps and red velvet cakes for dessert.

Nikki Beach Marbella opened in 2003 and is located on one of the finest white sandy beaches. The beach club comprises a swimming pool with VIP beds on a raised deck, a large open-air restaurant, a centrally located octagon-shaped bar, a Lifestyle Boutique, and a VIP terrace with spectacular views of the Mediterranean Sea.