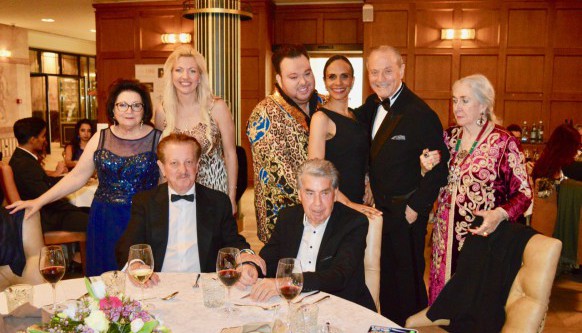 
On Friday, March 15, 2019, one of the best Galas of Marbella took place, Oscar Horacio and his team presented the Golden Book of MARBELLA INTERNACIONAL 2019, including local, national and international entrepreneurs the Doss restaurant of Marbella, Spain

Oscar Horacio formally thanked his team and the attendants to the event through all his media regarding the spectacular gala in which, for the first time, The "gold medal for Marbella Te Quiero" was given to the honoured people of this beautiful Spanish city.

The group of honour formed by Marbella Professionals like Natalia from Cellumed Clinic and the local businesswomen Eneriet Gallego along with the participation of other important targets from Spain and around the world were welcomed to the gala sponsored Manolo Santana and Carmen Lomana.

In addition to the award, the guests witnessed Marbella’s most spectacular fashion show presenting for the first time the great stylist and designer Patricia Duran Castro, with a great international showcase of Spanish, Argentinian and Brazilian collaborations and the stunning Presentation of Noelia Thames as the lady Marbella 2019.

Get the insights and gallery of the fashion show here!

Among the guests, was the presence of the owners of Döss who offered their space to give life to this event, Giuseppina and Bruno Filippone.

Check out the insights of this marvelous gala, take a look at our gallery just below!

BE SEEN! BE VISIBLE! I-Marbella.com
Be part of Marbella’s present, past, and future!

Leave your stamp on Marbella’s fascinating and spectacular history!