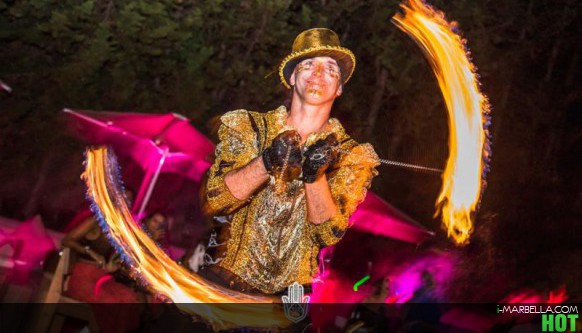 
On August 24 of this 2017, Finca Besaya hosted an awesome Gold party in Marbella, Spain, offering a night filled with glam, fashion and the most colourful environment focused on Gold as its main theme.

With hundreds of visitors, the club was enlightened with the presence of people from all over the world that got reunited in the City of Marbella, Spain to enjoy a night of allure bright and music for the fifth time in the hands of Tequila Patrón.

"Finca Besaya" is a restaurant and also a place for drinks, at the foot of Sierra Blanca  in Marbella. It enjoys great popularity, so in summer, despite the fact that the terrace is open to the public, it is imperative to book in advance. It is a large country house, which uses the upper floor and its terraces, as a restaurant, while the lower floor and its terrace serve as a bar.

Lisa Clark 10-12-2017 06:54
I am Lisa Clark, from CANADA, I promise to share this testimony all over the world once my Husband return back to me, and today with all due respect i want to thank PROPHET SALIM for bringing joy and happiness to my relationship and my family. I want to inform you all that there is a spell caster that is real and genuine. I never believed in any of these things until i loosed my husband, I required help until i found a great spell caster, And he cast a love spell for me, and he assured me that I will get my husband back in two days after the spell has been cast. Three days later, my phone rang, and so shockingly, it was my husband who has not called me for past 6 months now, and made an apology for the heart break, and told me that he is ready to be my back bone till the rest of his life with me. PROPHET SALIM released him up to know how much i loved and wanted him. As I`m writing this testimony right now I`m the most happiest woman on earth and me and my husband is living a happy life and our love is now stronger than how it were even before our break up. So that`s why I promised to share my testimony all over the universe. All thanks goes to PROPHET SALIM for the excessive work that he has done for me. please brothers and sisters if you are ppassing throuhg any kind of problem contact this great sspell caster
via his email (excellentspelltemple@outlook.com) or his website (https://excellentspelltemp.wixsite.com/spell)