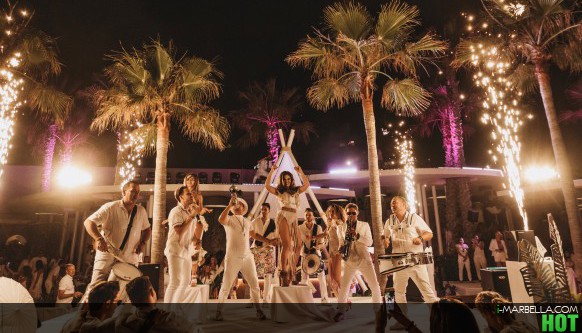 Marbella's most recognized party it's back again! 2019 Source: Nikki Beach


On June 1st, 2019 Marbella's most recognized party revamped itself in the Playa Hotel Don Carlos. A daytime party where more than a thousand guests celebrated its sixteenth season with a new edition of its renowned White Party. Nikki Beach Boho universe style.

The most expected White Party in all year and a singular event where the particular lifestyle of Nikki Beach acquires its maximum expression in white as its absolute protagonist.

Faithful to its Marbella calendar after sixteen seasons of celebration every summer. Nikki Beach Marbella commemorates one of its most iconic and popular parties at an international level.

For the first time in its history, the White Party started at 12 noon, a time where music, gastronomy, entertainment, fashion, cinema, and art. Were the strongest elements that defined this party.

With the unique Costa del Sol as the backdrop, the boho chic universe inspired every corner of the beach club, paying tribute to the origins of the brand that this year celebrates its 20th anniversary.

The night was an unpredictable set of fantasies complemented by surrealist art, juggle, avant-garde cuisine and spectacular elements leaving guests wondering if they had been in a dream.

One of the strong points of the afternoon was the interpretation of the London artist Key Sones, who song after song demonstrated his imposing voice with soul and dance rhythms accompanied by worked choreographies of his dance group.

The boho chic universe inspired the development of an event full of live musical performances and shows.

About Nikki Beach Global
Nikki Beach was born in 1998 by its founder and businessman Jack Penrod as an original concept of luxury beach club capable of combining music, gastronomy, entertainment, fashion, film, and art in one. Today, as Nikki Beach celebrates its 20th anniversary and the brand has become a global luxury and hospitality lifestyle company comprised of a division of 14 beach clubs; 4 hotels and resorts; a lifestyle division (including fashion stores and a magazine); a special events division; and Nikki Cares, a non-profit charity division.

Annika Urm is a celebrity journalist, blogger, public speaker, international influencer, the director of i-Marbella.com, and her job is to report emotional experiences and facts in the best possible way. Annika is a modern entrepreneur, a business lady of high standards and exquisite taste. Annika's incredible performance is best described by her numerous followers (more than 200,000.00 each month)