Reopening of La Meridiana by Olivia Valere in Marbella, July 2018 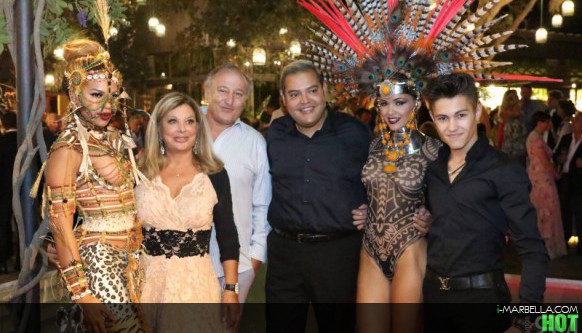 
La Meridiana reopened its doors on July 18th, 2018 in a great pre-opening party, now under the guidance of Olivia Valere, Arnó Valere and their partners, with a new image and a menu of Mediterranean cuisine under the supervision of Goizeko executive heads with a terrace, a garden, and the ethnic Peruvian restaurant APOTEOZ

The emblematic and mythical place of the jet-set, La Meridiana, has reopened its doors by the well-known businesswoman Olivia Valere and her son Arnó Valere, who received half a thousand guests at a grand opening party of their new and renovated facilities.

There are many memories kept at a place like this, which received the most famous celebrities in the world when they visited Marbella. Not so long ago, the First Lady of the United States, Michel Obama, also dined here. Now the emblematic place is completely renewed, under the image of the famous businesswoman, who plays every move brilliantly, Olivia Valere.

Among the novelties of the new era of La Meridiana, there will be the Mediterranean cuisine restaurant under the supervision of Goizeko executive heads with terrace, garden, and the ethnic Peruvian restaurant APOTEOZ. The restaurant will feature live performances by a band with 7 musicians who will entertain the guests all the time.

At the party, which was attended by many well-known faces of the social and business life of Marbella, was also the Brazilian Rodrigo Álvez, known as the Human Ken, who praised the excellent work of the businesswoman Olivia and did not stop taking pictures with all the assistants.