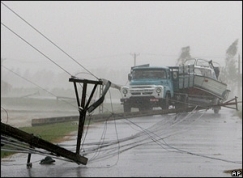 
Vietnamese officials have reported that at least 22 people were killed by Typhoon Ketsana, which brought torrential rainfalls and heavy flooding to the central areas of the country. "According to our official count as of Tuesday afternoon from the local authorities, the typhoon killed 22 people," said an unnamed official from the country's national flood and storm committee.

170,000 people were evacuated ahead of the typhoon, which brought peak winds of 90 miles per hour (144 kilometres per hour). Typhoon Ketsana had earlier battered the Philippines, killing over two hundred people there.

Ketsana made landfall in the afternoon on Tuesday, 37 miles south of Danang, the National Weather Center reported.

Flights departing and arriving at the Hue and Danang airports were cancelled due to inclement weather, and fishing boats were ordered to return to shore.

Several of the casualties from the storm were due to falling trees and power lines. Truong Ngoc Nhi, the vice governor of the Quang Ngai province, south of Danang, said that "there's a blackout across our entire province. Streets are strewn with fallen trees and utility poles. It looks like a battlefield."

Provincial disaster official Nhuyen Minh Tuan said that "the rivers are rising and many homes are flooded, and several mountainous districts have been isolated by mudslides."