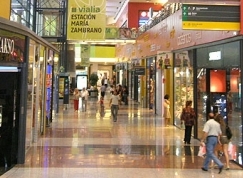 
Local small business owners are up in arms against a sentence which allows the Vialia Shopping Centre, located at the main train station in Malaga, Maria Zambrano, to open every day.

The Andalucian High Court has ruled in favour of Nuevos Espacios Comerciales SA, the promoter, allowing the centre to open 365 days a year, much to the delight of the many people who only have weekends to go on a shopping spree.

Ever since the opening, trade unions, shop owners and the Junta de Andalucia have been unable to come to an agreement over how to interpret the Andalucia Indoor Commerce Law. The Commerce Federation and the Junta have argued that the centre was created for the use of local shoppers for than for train passengers passing through the station, and therefore, they claimed, it should only be able to open on eight Sundays or holidays throughout the year.

However, on October 27, overrules a previous sentence in which it was considered that Vialia had committed a serious offence by keeping its doors open to the public and had been fined millions of euros. There had also been more than 70 complaints made against the company. There will be no possible appeal against the latest sentence, which maintains that businesses located within a transit area such as an airport, port or train station can open every day of the year, something which was agreed in the commercial license issued by the local authorities.

Vialia opened on November 28, 2006 and was packed with people ever weekend after that. The 56,000m2 complex has 102 shops and restaurants as well as a cinema and a bowling alley.

Get the Marbella VIP Discount card (5)