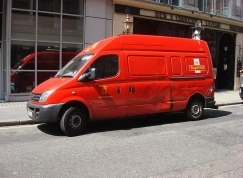 Royal Mail workers have voted 3:1 in favour of a nationwide postal strike in the United Kingdom.

The Communication Workers' Union (CWU), that represents employees of the postal service balloted members on nationwide strike action, following a series of regional strikes over the past 3 weeks. Of the 80,830 members consulted, 61,623 voted in favour of a walk-out.
The union's General Secretary, Dave Ward, said that there would be no strike action for at least 10 days.
The possibility of further talks with the Royal Mail before undertaking action has not be ruled out; any walk-outs in the run-up to Christmas will cause extreme disruption to deliveries.