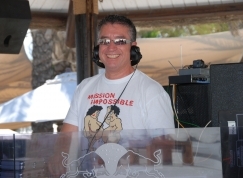 
Nikki Beach DJ Mario Zarate has been nominated for Best Resident DJ and DJ of the Year!

The well-known Costa del Sol DJ, Mario Zarate, has been nominated for two awards by prestigious magazine Deejay España;  best resident DJ, for his legendary sessions at luxury beach club, Nikki Beach Marbella  and DJ of the year in Spain.

Already well known among the club-going public, Mario hopes that his many fans will support him and vote for him to clinch these awards.


But for those who are not yet aquainted with this brilliant DJ, Mario Zarate ha been spinning discs in the best clubs for 25 years. Born in Argentina, Mario lived for many years in Sweden, and his DJing talents have taken him to clubs and events around the globe – London, Dublín, Moscow, Tallin, Oslo, Stockholm, Lisbon, Buenos Aires and California are among his musical conquests … For the past four years he has been the resident deejay at Nikki Beach Marbella.  More than 100.000 people have enjoyed Mario’s sessions in 2010, with over 300 appearances in the most exclusive venues in Europe.

Mario Z’s musical style takes in everything from Deep Funk to Techno House and his sessions at Nikki Beach’s Amazing Sundays are legendary , when he whips the summer party crowd into a frenzy with the best beats around.  At present, Mario is working on his first album with the French producer, Eric Duval. Entitled “Kaos Art Concept” it will hit the music scene in 2011.

To help Mario win these DJ awards, vote for him through the webpage: www.deejaymags.com in the DJ of the Year category, and  Best Resident club DJ in Spain at Nikki Beach.

Dom 12-01-2011 23:17 He´s shit and to be honest I worked and Dj´d at one of the biggest dance labels in the world for POSITIVA owned by EMI Records. Worked all over the globe with a lot higher names than he has under his belt. Not worth the muck under my shoes. As for his little bar in Doña Pepe... Enough said!1/10 Outside of Marbella, He is nothing and nobody would take a 2nd glimpse!
0