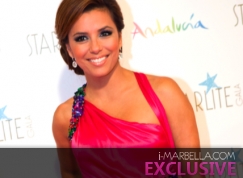 Definitely  the most glamorous event this summer, the Starlite Gala was held last  weekend at the  Hotel Villa Padierna, where big names were there to support the charity event.

Antonio Banderas, Eva Longoria, Sandra García-Sanjuan and Maria Bravo were the organisers, and were joined by  500 guests who had paid more than 800 euro per head (with 150 dissapointed guests left on the waiting list). Many celebrities attended the event including Melanie Griffith, Tony Parker,  Carmen Lomana,  Luis Alfonso de Borbón and his wife Margarita Vargas, the two famous journalists Carlos Herrera and Mariló Montero, Boris Becker, Adriana Karembeu, and many others. 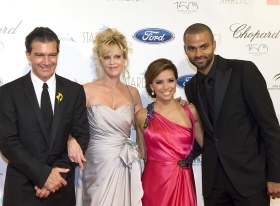 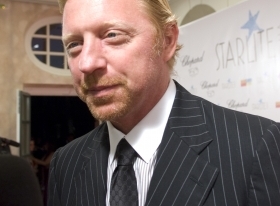 To raise money for  the three charity organizations : Eva's Heroes, Niños en Alegria and Lágrimas y Favores, many exclusive celebrity experiences  were auctioned inluding  spending a day with Eva Langoria on the set of DESPERATE HOUSEWIVES in Los Angeles, which  raised 25.000 Euros,  grace the red carpet with top model Eugenia Silva on the opening ceremony of the Cannes Film Festival, Experience the MTV Music Award and the After Party with the artists, but the highest experience auctioned was to be Antonio Banderas' special guest at his Broadway Musical Zorba and dine with him, which raised 225.000 Euros.