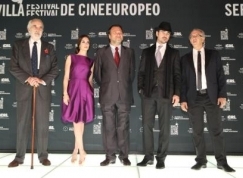 The glitz and glamour of the film world came to Seville on Friday as the city played host to the sixth edition of the  European Film Festival.

Farrell, who took time out to sign interviews and pose for fans that were waiting to catch a glimpse of the stars, was presenting his latest film, Triage.  Farell plays a photo-journalist trapped in the war in Kurdistan. The film was shot in Alicante and Paz Vega plays his wife and Christopher Lee her grandfather.

The Seville European Film Week runs until November 14 and more than 150 films will be shown. There is also a retrospective of the films of Nicholas Roeg, who is president of the jury in the official selection.

Other actors who were honoured during the festival’s opening weekend were British actors John Hurt and Sir Ben Kingsley.