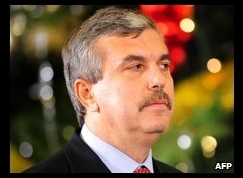 Location of Romania in map of Europe
Image: Quizimodo.

PSD member Dan Nica was fired earlier in the week after he made a statement suggesting the possibility of election fraud in November's upcoming presidential ballots. The PSD party leader, Mircea Geoana, said that the entire PSD had resigned to protest against Nica's sacking.

"All PSD ministers, supporting Dan Nica, are announcing their resignation from government. The president succeeded in triggering a political crisis, Geoana said.

The other major party, the Liberal Democrats (PD-L), will be able to rule by itself until the elections come. However, appointments for new ministers will have to be approved by the parliament.

The collapse has prompted concerns that Romania will not be able to meet the International Monetary Fund's fiscal targets in exchange for US$29 billion in aid given to the country in 2009.

Strategist Koon Chow for Barclays Capital said that "one needs to see how a minority government, if that's what we do get, can continue to adhere to the IMF programme. That's key. The worst that could happen is that the next tranche will be delayed for a few months, I don't think the next government will walk out of the programme," he said to the Reuters news agency.