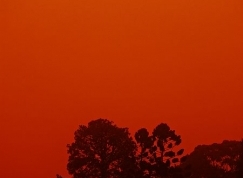 s covered much of New South Wales and southern Queensland, Australia, including the major cities of Sydney and Brisbane. The storm is causing eerie red skies, as well as breathing problems, traffic chaos, and flight cancellations. The dust storm has led to eerie red skies across Sydney.
Image: wilf2.

Residents have described it as like "Armageddon" or "being on Mars".

The red dust plume is visible from space and, according to Dr John Leys of the NSW Department of Climate Change and Water, stretches 600 km along the coast, dropping 75,000 tonnes of dust into the sea every hour. The Bureau of Meteorology said it was the worst storm in 70 years.

The dust is thought to have been brought from the desert by an extremely low pressure system, which has also caused other extreme weather. Hail storms have smashed windows in New South Wales, with stones as large as cricket balls reported in Crookwell. Winds up to 100 km per hour are also predicted for Sydney.

Twin girls who were joined at the brain are discharged from the hospital. (2)