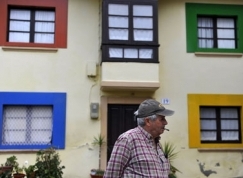 
A tiny Spanish village has provided the location for the latest Microsoft advertisement which will be aired for the first time today, 22 October.

The village of Sietes in the far north of Spain makes an ironic choice for the Microsoft’s Windows 7 advert as the town only offers one internet connection which, according to online news provider Spanish News, operates at the pace of a snail.

The whole community of Sietes is made up of just 40 citizens, most of which do not know how to use a computer – which is why the corporation finds it the perfect choice for their ad which aims to promote Windows 7 as a user-friendly system which is easy to operate.

A team from Microsoft arrived at the quaint town with 50 computers and taught its residents how to operate the new software while filming the advert which is shown on air for the first time today.