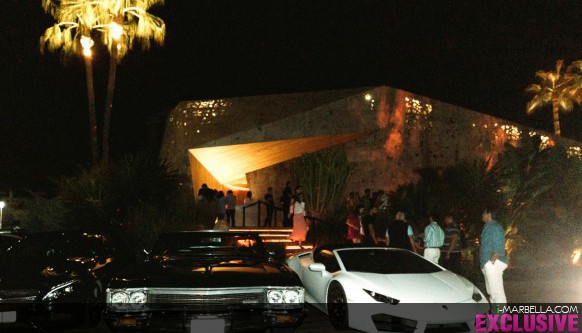 
The Marbella Police are searching for several hooded men who smashed up a nightclub ''Club Momento'' with extensible iron bars on the Saturday night of September 15th after midnight 2019.

It was a regular Sunday night party in Marbella until after 00:15h a hooded gang (around 12 men) arrived in top-end vehicles armed with baseball bats, metal bars and other weapons to the night club Club Momento located in the heart of Marbella.

After entering the club they smashed everything within reach - furniture, lamps, bottles, and glass. Before leaving as quickly as they had come. The customers in the club were left shocked and one member of staff suffered minor injuries in the incident.

Approximately four people left each vehicle, before entering the club and destroying everything inside. “They destroyed everything in their way. They even broke phones against the walls.” said witnesses of the tragic event. The attack lasted 10 minutes, before the thugs fled the scene, hurling a smoke bomb behind them so they couldn’t be followed.

Luckily, no customers were attacked during the assault, but one person was left slightly wounded in the fallout. The security at the club, unfortunately, failed to intervene in the raid, which took them by surprise.

The National Police said the attack was organized by professionals. In addition, the Police also confirmed that the owners of this club Albert Beniflah Lallouz are also the owners of beach club Playa Padre where Maria Bravo is also owner that was intentionally burned a few months ago in broad daylight on Marbella's Cable Beach.

Thanks to the investigations that are being carried on by the police they were able to identify what time they arrived and what type of vehicles they used checking the security cameras of the club and venues around the Club Momento to clarify the facts.

Unfortunately, when they escaped on the vehicles, the license plates are not distinguishable as they put some stickers so that the car could not be located.

This attack was undoubtedly more than planned, as the National Police patrols were close by. However, one came through Puerto Banus and the others through the Golden Mile, and none saw the vehicles. It is therefore believed that they fled via a secondary road leading to the Istán highway behind the Milady Palace club. And from there, to the highway. It was a seamless plan.

Among other violent events that have shocked the citizens of Marbella was a police claim from a mother due to an attack that suffered his son where they thugs disfigured beaten up.

The plaintiff's son was walking along the avenue with a co-worker and suddenly three men, without a word, threw him to the ground and kicked him in the head several times. A fourth person, accompanied by the aggressors, threatened the couple with a knife, although he was not directly involved in the aggression.