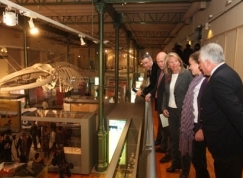 Marbella Mayor Ángeles Muñoz, was at the National Museum of Natural Sciences (MNCN) in Madrid for the unveiling of the skeleton of a 20 metre long whale 20 that washed up on the San Pedro Alcántara beach in February 2008. Muñoz, accompanied by the municipal delegate of the Environment, Antonio Espada, has stressed the importance to the city "that Marbella is connected to the prestigious National Museum through this exceptional specimen, the largest so far that has appeared in the Mediterranean. Marbella wants to contribute to "the protection, preservation and study of cetaceans."

The museum director pointed out that it is a "unique piece of admirable proportions and further enriches the museum's impressive collection. Specifically it is a fin, female 20.4 meters in length and adulthood. In addition, the skeleton weighs over 2,500 pounds and during its short time of exposure has become one of the most popular attractions at the MNCN"

The whale named "Vega" by a contest in schools in Marbella was washed up in early 2008 on the beach of San Pedro Cortijo Blanco. "

The fin whale is the second largest marine mammal, just behind the blue whale, hence the importance of this new piece which is now part of the permanent exhibition at the National Museum of Natural Sciences.