Lotus Club a reference in the nights of Marrakech. April 2018 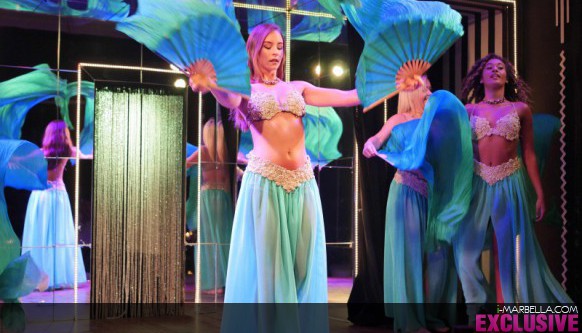 
The famous presenter José Manuel Parada visits Lotus Club Marrakech for the first time with the production company Ramos Comunicaciones to get to know one of the most emblematic places at night in the city. Gastronomic tasting and live show will be the experience you will have during the recording of a special program on luxury tourism in the south of Morocco in April 2018.

Marrakech is characterized by a wide variety of nightlife in the city. Many venues open their doors only at night and offer live shows for the enjoyment of international visitors. The Lotus Club Oh La La of Marrakech is a landmark in the imperial city. Therefore, the presenter José Manuel Parada with Felix Ramos, have visited Lotus Club during one of his recordings for television.

Morocco continues to grow in luxury tourism, for the day you can visit its medina, make purchases or have an adventure in the palm grove, and at night, enjoy an exquisite 5-star dinner and watch a live show, as is the case of the prestigious Lotus Club Oh La La. This opened its doors back in 2009 and has become a benchmark for Marrakchi nights.

A dancer Mood during the live show at the Lotus Club

The Lotus Club kitchen is a reference in gastronomy, it offers international dishes as well as typical Moroccan dishes, but with an haute cuisine preparation. Located in the heart of the district of Hivernage, the restaurant offers two bars, as well as different elegant and cozy spaces, ideal to savor original and colorful cocktails, while enjoying one of the three gourmets offers with international flavors from the Japanese, passing through the French and of course the Moroccan.

The presenter Félix Ramos, is in the month of April recording a report for his television program "Together with you: Around The World" that shows the luxury in the south of Morocco, organized and sponsored by the travel agency Maroc Excursions.

The final destination of the producer Ramos Comunicaciones with guest J. Manuel Parada is the desert, but they have made a stop in Marrakech to show places with charm, and haute cuisine has been reflected in the visit to Lotus Club.

In addition, he is accompanied by one of the members of the producer Different Visual, Jordi Muñoz, who also collaborates in reports made in the desert of Morocco, and specialist in images with Go Pro, among others. For the first time, he could enjoy the show offered by Lotus Club, where in addition to dinner you can see the live show of Mood. During the recording they tasted dishes such as fresh Dakhla oysters, a Burrata tierana, beef carpaccio, salmon tartare, a sushi board, Moroccan pastry and their typical rolls stuffed with vegetables or meats, or second courses such as duck confit , Giant prawns with their special sauce or the typical dish of the earth the tanjía of veal and lamb.

Felix Ramos in Marrakech and Agadir with Malena Gracia Vol.2