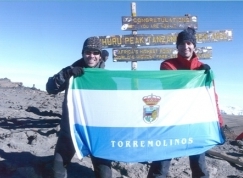 Two brothers from the town of Torremolinos reached the summit of Kilimanjaro in just five days.

The Town Hall of Torremolinos proudly announced the news that the two brothers – both doctors from the Costa del Sol town – had reached the summit of Africa’s highest peak and one of the highest volcanoes in the world, Tanzania’s Mount Kilimanjaro.
Typically Spanish reported that José Manuel and Alejandro Fernández Montero took five days to complete their gruelling climb, which started 3,100 metres above sea level at the Machane Hut refuge which they reached after trekking though dense Tanzanian jungle.
On reaching their goal, the brothers proudly planted the flag of Torremolinos on Kilimanjaro’s summit which towers a massive 5,985 metres above sea level.

Lady Malaga 2011 is from Marbella!

Pensioner shot dead on a bench in Torremolinos