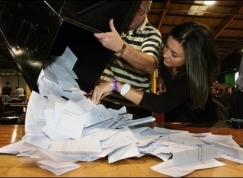 On Saturday, 67% of Irish voters favored the European Union's (EU) Lisbon Treaty which now requires approval from the presidents of the Czech Republic and Poland for ratification.

With polls closed at 10 PM local, the vote in favor of the EU treaty stands at 67% in favor and 33% against. 41 of Ireland's 43 constituencies had a majority of voters in favor of the treaty. The treaty was mainly supported by Fianna Fáil of Ireland's Republican Party, Fine Gael of the United Ireland Party and Ireland's Labour Party amongst others and was opposed mainly by the Sinn Féin Party and the Irish Farmer's Party. The Irish rejected the Lisbon Treaty in June 2008 when 53% of the population voted against the Twenty-eighth Amendment of the Constitution of Ireland that covered the ratification in a referendum. Since 2007 the Lisbon treaty has undergone a series of ratification votes and reviews in all of the current 27 member-states. Ireland was the only state to require both a parliamentary vote and a popular referendum.

The Lisbon Treaty is a number of amendments to the Treaty on the European Union and the Treaty Establishing the European Community, which was later renamed the Treaty on the Functioning of the European Union. Some of the major tenents of the Lisbon Treaty include the legitimization of the European Central Bank, revisions to European Court of Justice powers, a restructing of EU-level legislative institutions, and the establishment of the High Representative of the Union for Foreign Affairs and Security Policy. Also, the treaty allows for the election of an EU President for two and one-half years by the executives of each member-nation.