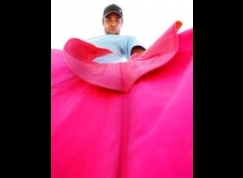 
Spain’s only gay matador, Joselito Ortega, is taking his controversial image a step further by signing a three year advertising deal with an energy drink aimed at gay people

The Málaga born bullfighter’s radical image has been met with fierce criticism by traditionalists who see Ortega’s flamboyance as a threat to the traditionally macho sport.
Ortega’s signature fuchsia pink cape – which has proved an invaluable marketing tool for the relative newcomer to the sport – was controversial enough but the endorsement of the Gay Up energy drink aimed at the homosexual club scene has the bull-fighting world in uproar.

Anna 21-10-2009 12:36 It's about time a challenge was made to the macho stereotypes of the world of bull-fighting. If the controversial sports plans to survive, it needs to get moving into the 21st centruy! Joselito's image only opens a whole new arena of people to the sport.
0

Barrymore is going straight after 15 years of being gay!