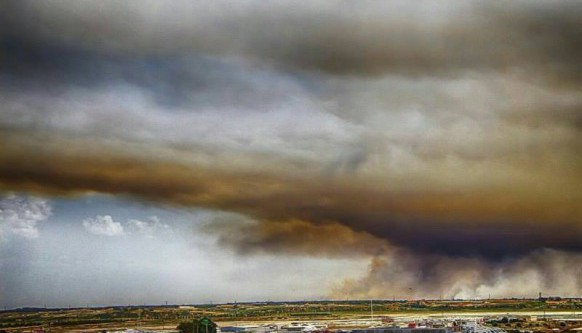 
A wildfire in southern Spain that caused the evacuation of hundreds of people and threatened to devastate one of Europe’s most prized wildlife reserves appeared to be subsiding on Monday. The fire started this Saturday 23rd in Huelva.

After two days during which about 500 firefighters and 20 aircraft had been battling the blaze, the regional premier of Andalucía, Susana Díaz, said she was “optimistic, but always with caution, because the wind can change”.

The fire began on Saturday night in the Huelva province and it spread throughout the weekend, fuelled by high temperatures and fierce winds. A total of 2,000 local people and tourists were evacuated as the fire approached camping sites, hotels and homes. Many evacuees were housed in sports centres, while others slept on beaches.

A charred forest after a wildfire in Mazagon, near the Donana National Park in southern Spain. Photograph: Cristina Quicler/AFP/Getty Images

On Sunday, police closed roads surrounding Matalascañas, where about 50,000 people were unable to leave for several hours as the fire raged.

“There were almost hurricane-like winds which were unpredictable and which caused our [firefighting] personnel at certain times to have to pull back from the front line because the danger was imminent and it was slipping from our hands,” said José Fiscal, of the regional government’s environmental department.

A man staring at the destruction left by the fire in Huelva, Spain.

The roads were later opened, but on Monday evening about 1,000 people were still in makeshift accommodation as the fire continued, albeit at a lower intensity.

Although no human casualties were reported, the authorities were deeply concerned about the fire’s proximity to the Doñana wildlife reserve. A Unesco World Heritage Site, Doñana is famous for its biodiversity, being home to many species of rare bird, as well as the endangered Iberian lynx.

Policeman keeping people away from the fire in Huelva, Spain

With the fire starting just a few kilometres from Doñana’s westernmost limits, the fire services prioritised protecting the reserve. On Sunday night, as the blaze approached, several lynxes were evacuated from an animal protection centre in Doñana, although one of them died due to the shock of the move.

Juan Pedro Castellano, director of the reserve’s most protected zone, said on Monday it was now unlikely the fire would reach that area.

Just a week earlier, 64 people were killed by a wildfire in central Portugal. Although the cause of the Spanish fire has not yet been confirmed, Ms Díaz said that experts had not ruled out the possibility that it had been deliberate. No lightning strikes, a common cause of such fires, were reported in the area where the fire started on Saturday.

Conservationists have criticised the fire-prevention strategy of Doñana and the area nearby. Juan Carlos del Olmo, of the World Wildlife Fund, said Doñana had been “playing with fire for many years” because it was surrounded by illegal plantations, electric cables and electric connections for unregistered water wells.

Which urbanisations have been burnt or affected by the fire?