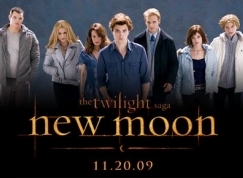 New Moon is the second in the Twilight series of films


New Moon launches in cinemas throughout Spain this weekend

Cinemas all over Spain are bracing themselves this weekend for an invasion of teen vampire fans with the release of New Moon, the latest in the Twilight series of films.

If you are looking at pure box office horror gold, then vampires easily lead the way. This year alone, fangs have been worn with gothic beauty and a sense of impossible love, from the teen-sensation books of Stephanie Meyer who scripted Twilight and the eagerly awaited New Moon to the Swedish art-house film Let the Right One In.

Twilight was the teen hit movie of last year and propelled Robert Pattinson into the spotlight in a way reminiscent of Leonardo Di Caprio after Titanic, adorning millions of Goth girls’ bedroom walls.  The normally shy British actor has had to deal with the constant hounding of paparazzi and fans for almost a year. His love life is always in question, and he is given almost no privacy, and Pattinson has claimed he still cannot get a date, even with his sex symbol status.

The actor has done his best to stay out of the tabloid spotlight, by remaining in his hotel as much as possible when he is not filming.  During a recent interview, he stated he hoped he was handling the fame all right, but his body language suggested he is still a little anxious about all the attention. Pattinson explains the overwhelming attention as part of job. Pattinson is assuming the fans love his character, the dreamy vampire Edward Cullen. With the upcoming New Moon film, he must be bracing himself for yet more public attention, although other co stars Kristen Stewart and Taylor Lautner are the main focus of the second film in the Twilight saga and there are rumours that Lautners’ werewolf could rival Patterson in the beefcake stakes.