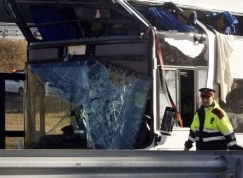 
A Dutch coach driver was not responsible for the death of a 15 year old girl, when his coach crashed in Spain, so has been released from a Spanish jail, and allowed to return to the Netherlands.

Union official Bigitta Paas commented that the investigation showed the driver was not speeding, or executing any other disregard of the traffic rules, but that the incident was simply a horrific accident.

The coach tipped over on the A7 motorway after the driver saw something cross the road killing the young girl, and injuring 19 more pupils and teachers who were on their way to visit Barcelona earlier this week.