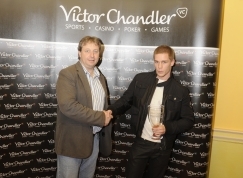 After much anticipation, nine weeks of furious leaderboard competitions and no less than 30 weekly finals and freeroll qualifiers, the Beat Victor II Live Final got underway on Saturday, November 28.  Far surpassing the original Beat Victor Live Final both in value and VIP treatment as well as opulence and outrageous karaoke performances, Beat Victor II was set in the fabulous surroundings of the San Roque Club where the finalists and their guests arrived to an all day welcome reception, putting everyone at ease and setting the scene for the remainder of the weekend.

When the $100,000 Live Final began the following day with one player short of the 30, expectations of a money finish were high in everyone’s minds but it wasn’t long before Aces were being cracked and dreams of becoming the Live Final Winner were being shattered – at least for another year. When it eventually came down to the final table of 9 after little under 5 hours of play, it was Yerlikaya with a 51k stack that sat preeminent in pole position and looking good to stay the distance. .

But despite his 2 to 1 chip lead going into the heads up play, it was Swede Ulf Sauer's, whose online name is "Yerlikaya",  turn to be the victim as Marcelo Gilioli Freire, " MMMGiloli",  whittled away at his chip stack to take the lead for the first time in the game. When the crunch time finally came even pocket queens wasn’t enough to save "Yerlikaya" from "MMMGiloli’s" 10 9 off suit when the flop revealed two more 9’s. With no help for 'Yerlikaya" on the turn and river his dreams of winning the Live Final were over and "MMMGiloli", who flew all the way to Spain from Brazil, was crowned the Beat Victor II Live Final Winner and a cheque for $45,000  with the first shot at playing Victor the following day and a potential pay day of $100,000.

Dawn broke on the following day with "MMMGiloli "set to take on Victor and the chance of increasing his winnings to $100,000. As the Chairman and the Challenger settled down to play it was anyone’s guess as to who would be victorious and bets on both players were being laid with reckless abandon. Just 37 hands later however and with the phrase “what goes around comes around” in mind, it was Victor had eliminated the young Brazilian and  it was "Yerlikaya’s" turn to take the hot seat..

From the outset it was apparent that neither player was going to give any quarter any time soon in this bout of heads up play and 48 hands into the game there was only a 600 difference in chip stacks. Eight hands later however that all changed when Victor was lured into moving all in with his middle pair, open ended straight draw only to discover that "Yerlikaya" had made good on his flopped flush draw on the turn. With Victor drawing dead, the game was in the bag for "Yerlikaya" and applause erupted before the river card hit the table.Ulf was crowned the Beat Victor II Champion of Champions and walked away victorious with total winnings of $60,000.