Barca back in business 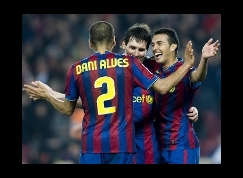 
It was back to business as usual for Barcelona, who thrashed Sevilla 4-0, while Real Madrid lost in Bilbao

Barcelona took their revenge for their midweek elimination from the cup, a 4-0 win over a depleted Sevilla  taking them five points clear at the top of the table. All the goals came after the break, the first scored by the visitors themselves when Escudé deflected a shot from Piqué in to his own net. Palop was once again on great form, but he was beaten for a second time when substitute Pedro ran on to a defence splitting pass from Xavi to lift the ball over the advancing keeper. After that Messi took over to deliver the killer blows, collecting a lobbed pass from Alves to score his 100th goal in a Barcelona shirt, and then running on to Abidal's pass to clip the ball past Palop once again in injury time.

Guardiola's side are assured the honorary title of winter champions after Real Madrid lost 1-0 to Athletic Bilbao earlier in the evening. The locals came out strongly from the start, Gurpegui and Toquero both hitting the post before Llorente headed the opener from Yeste's corner with only three minutes gone. After that though Madrid felt themselves unlucky not to at least save a point, Benzema hitting the post shortly before half time and Cristian Ronaldo bringing a couple of good saves out of Iraizoz. Athletic ended with ten men when Gurpegui picked up a second booking in injury time, but the final whistle went seconds later.