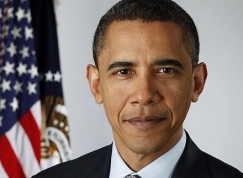 
U.S. President Barack Obama has won the 2009 Nobel Peace Prize. The Norwegian Nobel Committee stated the award was "for his extraordinary efforts to strengthen international diplomacy and co-operation between peoples."

The award is widely viewed as surprising given that Obama has only been in office for nine months, having been inaugurated in January this year. He is also only the third U.S. President to receive the prize whilst still in office, after Theodore Roosevelt and Woodrow Wilson.

Head of the awarding committee, Thorbjørn Jagland, stated the prize was awarded so early "because we would like to support what he is trying to achieve." He particularly praised Obama's work on nuclear disarmament.

Obama was said to be "humbled" by the award.

The Nobel Peace Prize has been awarded since 1901 by a committee elected by the Norwegian parliament. It was established by Swedish chemist Alfred Nobel, to be given to "the person who shall have done the most or the best work for fraternity between the nations and the abolition or reduction of standing armies and the formation and spreading of peace congresses."

The president of Sevilla FC sentenced to 7,5 years in prison