Novak Djokovic Loyal to Marbella, working with Angeles Munoz to get it as Center for Elite National & International Sports @Puente Romano 2020
News Eng 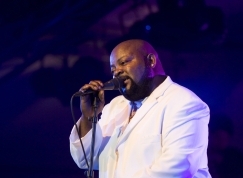 Eric Conley’s rich baritone voice has always lent itself to the great songs of Barry White and as a child he was constantly singing along to his records . However, it wasn’t until many years later that he decided to bring back the fantastic music of his hero. For the last 15 years he’s been doing just that and delighting fans all over the World with his music. We spoke to Eric to find out more.

Coming from a family of musicians, a career in music was almost certain. He started early, singing in gospel choirs from the tender age of seven he started his own choir at just thirteen. His formal career began as a backing singer and touring with Gospel groups in the US.

Despite some early success, Eric then took a break from music to study business and serve in the US Army. It wasn’t until he returned to music in 1987 that he was prompted to think of emulating his hero Barry White.

Since a music producer planted the seed over 15 years ago, Eric has been touring with The Barry White Experience and his band The Unlimited Love Orchestra. This show pays tribute to the man and his music, with Eric singing his best compilation albums and delighting fans all over the world.

Eric is delighted with the turn his career has taken. “I have been so lucky to be able to sing the songs of an artist I admired so much for all these years. The Barry White Experience has taken me all over the world, Travelling is one of my greatest passions and being on the road is really fantastic.

I’ve played some amazing gigs, from an 80,000 venue in Belgium to more intimate venues with real die-hard Barry White fans. I was lucky enough to perform in Red Square in Moscow which was an incredible location, but wherever I go and whatever I do, the response from the audience always lifts my spirits and makes me happy to be performing.”

The Barry White Experience is much more than an imitation of the great musician. Eric has always been clear that the show isn’t about copying Barry White or trying to look like him, but rather a way for him to bring the much loved music back to life for fans. “I had the honour of seeing Barry White perform in Frankfurt, Germany at what turned out to be his last live performance. It was fantastic to see and hear him sing in person and inspired me to really deliver a performance which lived up to his incredible live persona.

I have listened to his music all my life and naturally sing close to him, so I have worked hard to make sure I do his songs justice, but I have never copied his movements or tried to look like him. I’ve often been asked why I don’t wear a wig, but that’s just wrong to me. We all know that Barry has passed away, so I don’t want to pretend to be him. My motivation comes from the love of his music and the show is to celebrate that music and remember him as he was, the great maestro.”

Eric is busy this year with shows planned in Russia, America, Germany and Spain. On July 30th he will be performing at The Millionaires’ White Summer Party in Marbella for 1,500 music lovers. He will be billed alongside Stephen Triffitt and Maxine Barrie who will be performing the songs of Frank Sinatra and Shirley Bassey for a night full of glitz and glamour.

Eric will be headlining the After Show Party which will get everyone up and dancing to the greatest hits of Barry White. He’ll be performing around 12 of the best loved classics along with his band The Unlimited Love Orchestra and he’s really looking forward to it. “It sounds like a great show and I’m really looking forward to visiting Spain again. I haven’t performed with Stephen and Maxine before but I know they are great performers so I’m looking forward to seeing them. It will be my job to get the party started and everyone up on their feet and I can’t wait to get the Marbella crowd dancing.”

You can find out more about this event and buy your tickets on the website www.millionairessummerparty.com