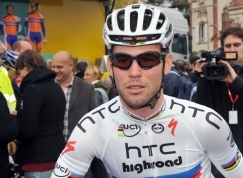 
The 26-year-old ‘Manx Missile’ brings a world-class pedigree to Team Sky having enjoyed the most successful season of his career in 2011. In September Cavendish became world champion after securing the World Road Race title and the coveted rainbow jersey in Copenhagen.

This followed July’s Tour de France, where Cavendish confirmed his position as the world’s leading sprinter by powering to five stage victories and securing the prestigious Maillot Vert, or Green Jersey, as the race’s overall leading points scorer. In addition to 20 Tour de France stage wins, Cavendish has secured a further 10 Grand Tour stage victories in his career, as well as the overall points title at the 2010 Vuelta a Espana. In 2009 Cavendish also won the prestigious Milan-San Remo race, one of the sport’s recognised ‘Monuments’.

Dave Brailsford, Team Sky Principal, said: "Mark is the greatest sprinter of his generation and is well on his way to becoming the greatest of all time. He is a rider of exceptional talent who has proved his pedigree at the very highest level of our sport.

“Mark is a born winner and what excites me most is the attitude he brings to all the teams he rides for. We want to inspire more fans to get into cycling and I can think of no one better to help us do that. We are delighted that the new world champion will be riding for Team Sky next season."

The news, revealed by Cavendish, was greeted with delight by his future team-mates, Bradley Wiggins, saying: "I think I speak for everyone in the squad when I say that we’re all delighted to have Cav joining us at Team Sky. He is the best sprinter in the world and has an energy and passion for cycling that is infectious.

"Team Sky has enjoyed a fantastic second season and Mark’s signing is another statement of our intent for next year and beyond."

Geraint Thomas, who along with Wiggins was part of the Great Britain squad which helped Cavendish to World Road Race glory last month, said: "Cav joining Team Sky is fantastic news. In many ways it’s like he’s coming home - the team has a number of riders and support staff that he grew up with and it won’t take him any time to settle in. "I think everyone saw that when we helped him to victory for Great Britain at the Worlds, and we are all looking forward to helping him deliver more wins for Team Sky."

Edvald Boasson Hagen, who won two stages at the Tour de France for Team Sky earlier this year and was a former team-mate of Cavendish's at what was then Columbia-HTC, commented: "I know from my time riding with Mark at Columbia-HTC what a special talent he is and it’s great that we are back on the same team. "Mark is a good guy, delivers when it matters and is another weapon in our squad for next year."