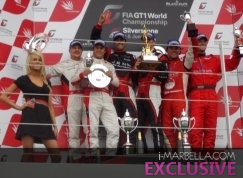 Young Driver AMR, sponsored by Buddha Beach,  finished on the podium for the fourth consecutive race at the British round of the GT1 World Championship at Silverstone. After a brilliant victory in Saturday’s Qualifying Race, Alex Müller (GER) and Tomas Enge (CZE) finished second in their Young Driver AMR-Aston Martin DBR9 in Sunday’s Championship Race. Darren Turner (GBR) and Stefan Mücke (GER) experienced a tough weekend in England and retired after an incident halfway through the race.

The start of the Championship Race went well for Young Driver AMR and starting driver Tomas Enge. From Pole, Enge took the lead and maintained it despite a hard pressing Nissan in second place until the mandatory driver change halfway through the race. After the driver change, Alex Müller left the pits in second position, but chased the leading Nissan and retook the lead. A couple of corners later, the Nissan went past Müller, but the Young Driver AMR-Aston Martin continued to set the leading car under hard pressure. In a dramatic end of the race, Müller ran several attacks on the leading Nissan and eventually saw the chequered flag with a brief gap of only 0,2 seconds in second position. The second place of Müller/Enge is the fourth podium finish for Young Driver AMR in five races and the second podium for the No. 7 Young Driver AMR-Aston Martin of the season.

Darren Turner and Stefan Mücke experienced a very hard weekend after they retired from the Qualifying Race and the Championship Race after incidents with Nissan-cars. The start went really well for Mücke. From the back of the grid, the No. 8 Aston Martin was already in eight place after the first lap. Mücke put a hard pressure on the cars in front of him, when he eventually got hit by a Nissan, which forced the Aston Martin DBR9 into a spin. Mücke could rejoin the race, but had to retire on the same lap after a second incident

“Again, I have some mixed emotions about this weekend”, Young Driver AMR team principal Hardy Fischer said. “Second place is a great result. Of course, we really would have liked to win here, but we saw a great race and a fair fight. Unfortunately Stefan Mücke made a mistake in the race, when he passed the Nissan too close. The car is badly damaged. We have a lot of work in front us and hope that we can repair the car in time for the next race. Our mechanics are the real heros of the weekend, they did an amazing job when they repaired the No. 8 car in time for the Championship Race and once again performed perfect pit stops.”

The Aston Martin team on the podium