Who's who: Peter Sundberg 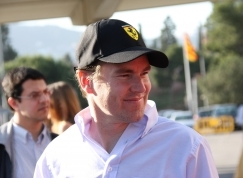 
Ten minutes with Peter Sundberg, the Swede with the need for Speed!

Peter Sundberg is, apart from a Marbella resident and Swedish passport  holder, one of the fastest and highest rated GT racing drivers in the world. He has won championships and races all over the world, having previously won the prestigious Italian Formula 3 championship, as well  as being one of the fastest in the F3 World Cup. He has raced as a professional in Japan, done test work for the Toyota group, and even Formula 1 testing for Minardi. He is also one of the few drivers that  can boast about having won races or championships in practically every  category he has raced. Most recently, he has won the past two Spanish GT championships in commanding style. He is now  contracted  as a Ferrari driver for the Dutch Portuguese Aurora group,  who plan to shortly enter Peter in the Fia GT World Championship.

How long have you lived on the coast?

I was born here, grew up and went to school here. My parents moved  down here many years ago and started a boat business here which has since expanded to other parts of Europe, but the base and main offices  are here. There are many urban myths about how my father and uncle came to Marbella, some say they swam from Sweden which obviously  is not entirely true, although they definitely swam the last couple of hundred metres!

What attracts you most about the southern Spanish lifestyle?

I would say obviously the climate, and the relaxed atmosphere that is  around here, which is a great contrast to the races, so it is great to relax and recharge. Plus in the winter you have Sierra Nevada just a couple of hours away. I’ve been lucky enough that my racing career has  not only let me make a living doing the thing that I most like to do, it has also made me live full or part time, in different times of my life, all over the world, places as different as Italy or Japan. So I’m lucky to have tried a bit of everything, and I can really say that for  quality of life there is no place in the world like Marbella.

My time here I spend mostly training, seeing one of my sponsors Exakt  Vodka which also have their base here, and I spend some time in the  family business Marina Marbella, where we sell and mantain  boats.

Do you holiday in other destinations now that you have relocated to a luxury resort? If so, where?

I go to Ibiza sometimes if I have time, which is also great although  it’s very seasonal, and also I go back to Sweden at some point every summer and then in winter also go back to train ice driving on frozen lakes. But I notice now that I’m back here I spend more and more time in  Marbella, it has a bit of everything.

Name a few of your favourite restaurants or cafes.

Definitely Bubbles restaurant in Puerto Banus, it’s a great atmosphere  and has brilliant food, and so that would be my favourite, although I also  enjoy La Pappardela, Sakura, and Terra Sana amongst many others

Beachside lunch then stylish nightclub, I think that they are perfectly compatible.  I’m not one for sunbathing on the beach, I find that boring, so when I do go to the beach I prefer to go by boat. I don’t like driving a car  to the beach- it’s much more relaxing by boat and takes you away a bit.

Puerto Banus, but sometimes it’s nice to go for a drink in the old town  too..

I love the traditional Spanish dishes, but also Japanese and Italian  are amongst my favourites