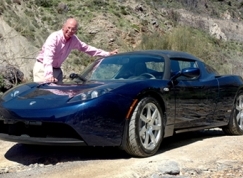 Otto Poldermans with his Tesla Roadster

Tesla Motors has delivered its first car to a customer in Spain, and the new owner charges his Roadster exclusively with renewable energy.

Amsterdam native Otto Poldermans is a founding investor in Solar Hydro Solutions, which builds and installs solar equipment to private and commercial customers in Andalusia. Poldermans, whose twilight blue Roadster is powered by a combination of solar and hydroelectric energy, joins a growing community of Tesla owners worldwide who power their cars entirely “off the grid.”

The retired plastic surgeon moved to a remote valley in the foothills of the Spanish Sierra Nevada in 2001. For nearly a decade he has powered his home with photovoltaic panels and turbines on the Rio Chico. His equipment will now also power his Roadster, which he received this weekend.

“I hope that my Tesla catches people’s eye. I want it to teach people that energy all around us and extremely abundant -- more than enough to power our homes and our cars,” said Poldermans.

The Roadster accelerates faster than supercars that cost twice as much, yet it produces zero tailpipe emissions and is twice as energy efficient as leading hybrids. It consumes no petroleum and plugs into conventional 220-volt sockets throughout Europe.

Tesla has delivered about 1,000 Roadsters to customers in 23 countries, including the first deliveries last month in Spain and Ireland. The first delivery in Spain came as Tesla representatives hosted test drives  in Marbella.

Tesla will deliver more cars this year in Spain, which is uniquely positioned to demonstrate the attributes of the Tesla Roadster – the only sports car that can be charged fully or partially with renewable energy.

Solar energy satisfied 3 percent of Spain’s electricity demand in 2009, and the government expects to derive 12 percent of the nation’s primary energy from renewable energy by the end of this year. That means Roadster owners in Spain get to drive world’s hottest sports car – and charge it from one of Europe’s cleanest energy grids.
The Roadster qualifies for a national rebate of at least €10,000 and a provincial rebates of €5,000 or more. Spanish owners get 75 percent off the yearly car tax. Roadsters also get free metered parking and free use of the high-occupancy vehicle and bus lanes – a priceless advantage in the dense traffic of Madrid and Barcelona.

Spain’s €8 million “Project Movele” will also fund installation of charge stations in Seville, Barcelona and Madrid. The government aims to have 1 million electric vehicles in Spain by 2014.

“The Roadster highlights Spain’s 21st century energy technology like no other car,” said Cristiano Carlutti, Vice President of European Sales and Operations for Tesla. “But ultimately, when you come to a stop light next to an idling Porsche or Audi, you will discover the Roadster’s killer app: You will leave other supercars in the dust -- without a shred of guilt.”

Calhalla 04-10-2010 23:06 Great to see the first Tesla arrive in Spain, especially when the take up of electric cars is so low. I read somewhere that the whole country has something like 16 cars.
I would be really interested to see how much the running costs average out to for Otto.
Maybe we could have an update in a few months.
0