VIP´s snubbed by a dull and damp Alonso 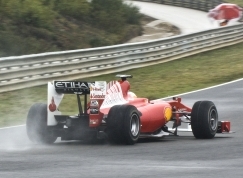 The Ferrari Club from Marbella were fully present and correct in the Ferrari garage today, eagerly awaiting Alonso´s appearance to put his Ferrari through its paces at the Formula 1 testing in Jerez. The Spanish prima donna would not even say hello to the fervent Ferrari supporters.

Even a friendly wave would have done said several disgruntled fans, but having said

that, the Spanish fans were ecstatic to see their hero speed around the former Alonso was 2 seconds off the pace today, is the new Ferrari up to scratch?    For sure the Ferrari team would have sent Alonso out with the lightest fuel load to get the quickest times to impress the locals, so what happened to the Spanish diva today??? A few words with Jaime Alguersuari, the youngest formula 1 driver in history and friend of Mark Megens Osorio, Marbella´s own Karting champion. (3)