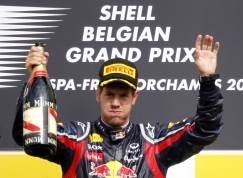 
Sebastian Vettel was back on the top step of the podium for the first time since Valencia in June, after a spirited drive saw him lead.

Vettel, who has 259 points to Webber's 167 after his 17th career win, had started from pole position with serious concerns about the durability and safety of his car's blistering Pirelli tyres.

The German had to overcome persistent  problems with the softer of the two Pirelli tyre options on offer at Spa-Francorchamps, with doubts emerging even before the race, as teams in the top ten sought the replacement of blistered rubber they were required to run. Permission was not forthcoming, and Red Bull, in particular, were left to take the grid with considerable uncertainty over the longevity of its tyres.

Both Red Bulls had suffered heavy tyre degradation in qualifying and the team had considered making pre-race changes and starting both drivers from the pit lane before taking a calculated risk to go ahead as planned.  In the end  though the problem proved manageable.

McLaren's Jenson Button drove another great race to edge out Fernando Alonso for the last podium place while team mate Lewis Hamilton, last year's winner at Spa, crashed heavily at Les Combes on the 13th of 44 laps while challenging for fourth place. Hamilton was unhurt, and later admitted he had been at fault, but the incident brought out the safety car while debris was cleared and the fencing mended.

Seven-times champion Michael Schumacher, the sport's most successful racer, celebrated the 20th anniversary of his Formula One debut at Spa with a fighting fifth place after starting in last position on the grid. Schumacher, whose car had shed a wheel in qualifying, declared it "a wonderful ending to a wonderful weekend." Nico Rosberg was sixth, ahead of compatriot Adrian Sutil for Force India and Ferrari's Brazilian Felipe Massa in eighth.

Webber once again had trouble on the grid, wrestling with the anti-stall device as others roared past, but he did manage to miss the early mayhem triggered by Brazilian Bruno Senna on his Renault debut.  Senna,  called up as a replacement for dropped German Nick Heidfeld, had qualified a very  impressive seventh but picked up a drive-through penalty for causing the 1st corner  collision, and ended up 13th.  While Webber  didn’t get his first win of the season, he did make one of the standout moves of the race by overtaking Alonso through the sweep of Eau Rouge with the two cars almost touching at 300kph.

"Well, you don't have much time to get the calculator out at that point, mate," Webber grinned when asked whether it was a calculated move.  "I think most of the race I was still charged with frustration from the start. "It's more rewarding when you can do it with someone like Fernando because he's a world class driver and he knows when enough is enough. Obviously my attitude might have been a bit different with someone else."

Champions Red Bull now have 426 points to McLaren's 295 and Ferrari's 231 in the constructors' standings.