The world’s most expensive cars revealed 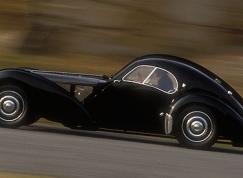 
A rich footballer may think he’s top of the tree splashing out $2,000,000 on a new Bugatti Veyron. But in the world of classic car auctions, that is merely a drop in the ocean…

The top 3 cars sold at auction recently total a scarcely believable $60,000,000. Let’s just put that into perspective – that’s nearly 200 Ferrari 458 Italias. But in this realm of car collecting the cost seems to be irrelevant – it’s purely a case of a bidding war in which one car nuts simply has to win over the other. So here are the top three cars sold in the last 5 years – and amazingly the cars in 2nd and 3rd place were bought by the same person!
1st – 1936 Bugatti Type 57SC Atlantic – $30,000,000

No, that isn’t a typo. Thirty million dollars. One of only three Bugatti Atlantics built, one of the others sits in the Bugatti museum, the other in ralf lauren’s massive car collection. Highly praised for its art-deco elegance, the Bugatti 1936 Type 57SC Atlantic was a step forward in it’s days. The car is widely considered the most beautiful pre-war car in all auto history, and is said to be the favourite design of Jean Bugatti himself.
Ettore’s son, Jean Bugatti, who played a large role in the development of the Type 57 series, personally styled the Atlantic. Jean’s lines draw an interesting mix of aircraft styling together with the avant-garde tear-drop that is so reminiscent of the thirties. Design highlights include a heavily raked windscreen, riveted fins, and oval doors with kidney-shaped side windows. The initial concept used Electron, an aluminium/magnesium mix for its body, which was impossible to weld, therefore the trademark ‘fins’ down the centre of the car and wings were used as the panels were riveted together. By production the body had switched to aluminium, but the fins and rivets stayed and have proved a stylistic trademark for the car.
The Atlantic uses a supercarged 3.3 litre in-line 8 cylinder engine, which produces 210bhp, and the whole car weighs just 930kg. This enables a top speed of 124mph, and a 0-60mph time of 9.4 seconds, remarkable in its time.
Oh, and the tag of $30m is an estimate as it was a private sale. It could easily have been up to $40m!
2nd – 1963 Ferrari 250 GTO Series II – $18,700,000

A controversial one, this. For many, the 250 GTO is well known as one of the most expensive and beautiful cars in the world. But the image they almost all have, is of the Series one car, with it’s trademark 3 vents at the front of the bonnet. This car is actually a Series 1 car, rebodied by the factory with the Series II body in 1964, making it somewhat of an anomaly.
This usually means the car will not be worth as much, but in this case it soared into the record books, selling for $18,7m to British Radio DJ and avid Ferrari collector Chris Evans. He had been hunting for a GTO for many years, owning a collection of over 15 Ferraris, and when this ar came up he just had to buy it, so he says.
One of only 36 250 GTOs made, and of even fewer with the Series II bodywork, it packs a highly strung 3.0 litre V12 engine pushing out 300bhp. This gives it a top speed of 160mph, and a 0-60mph time of under 6 seconds.
3rd – 1961 Ferrari 250 GT SWB California Spyder – $10,4000,000

“Life moves pretty fast. If you don’t stop and look around once in a while, you could miss it”
A classic line which many will remember from the 1986 film Ferris Bueller’s day Off. But the other undoubted star of that film was the bright red Ferrari 250 GT SWB California Spyder, which gets painfully smashed up at the end (worry not readers, it was a mockup). We don’t know if the film had any bearing on Chris Evans when he went to buy one, but we’ll bet it was in his mind…
This was the first $10m-plus Ferrari 250 Evans bought (though he did already own a $3m 250 GT Lusso), purchased at the RM Auction “Ferrari Leggenda e Passione” in Maranello, Italy in May 2008.  It has a 3.0 litre V12 engine producing 250bhp, giving a top speed of 145mph, and a 0-60mph time of 6.5 seconds.