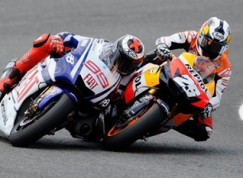 Lorenzo finished 5.990 seconds  ahead of his Italian team mate, who had started seventh on the grid. Rossi is back with Yamaha after two years at Ducati and he  struggled with Honda's  Marc Marquez as the pair exchanged close passes in the closing stages.

'This was my target to arrive on the podium from November of last season. It could have been easier apart from the mistake at the beginning with Dani Pedrosa,' said Rossi, clearly elated after two miserable years away from Yamaha. Fellow Spaniard and title favourite Dani Pedrosa came fourth, 9.473 seconds behind Lorenzo while Briton Cal Crutchlow finished fifth having started second. Spain's Pol Espargaro won the Moto2 race and compatriot Luis Salom triumphed in the Moto3. The second event of the season is the Grand Prix of the Americas in Austin on April 21.