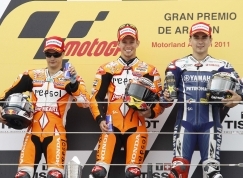 
In his new all orange Honda livery Casey Stoner extended his MotoGP championship lead with an eighth win of the season at Aragon in Spain.

Yamaha rider Ben Spies made a storming start to take the lead into turn one, Pedrosa charged past Repsol Honda team-mate Stoner, but it was the Australian who was soon into the lead at the end of the long straight. Stoner then proceeded to streak away. As those hoping for a close race had feared, no-one could match the Australian's pace and Stoner continued to pull steadily away from Pedrosa to claim a 8.162sec victory.

Pedrosa in turn rode to a lonely second, but Spies was soon under pressure for third from Gresini Honda's Marco Simoncelli, who passed him into the final turn on lap 9.  The Italian then rashly  undid all his good work by carrying too much speed into  the turn at the end of the long straight on the next lap, dropping him to fifth behind Spies and factory  Yamaha team-mate Jorge Lorenzo.

Lorenzo, Stoner's nearest title challenger, had predicted third would be all he could hope for after struggling all weekend, and the Spaniard achieved that target when he passed Spies with ten laps to go. Simoncelli was able to follow the Spaniard through and and retake fourth spot.

Valentino Rossi was making his way through the field after starting in the pit lane, and his battle with British rider Cal Crutchlow was great to   watch with the rider from Coventry coming out on top with a ninth place finsh.

The third Repsol rider Andrea Dovizioso failed to last the first lap as he crashed out. Other non finishers included Capirossi, who banged the rear wheel of Tony Elias, sending them both down with seven laps to go. Elias was quick to check on the well being of the slow-to-stand Capirossi as they walked away.

Stoner then, eased to his 31st victory in the top class, putting him joint fifth on the all-time list, as he moved 44 points clear with just 100 points left to play for. Lorenzo said: "It was impossible to win today so third is not too bad. Casey was just too fast."

Stoner had this to say after the race: "It felt good all weekend. The bike has been fantastic and the only problem was the wind - it was changing direction and speed every lap so that was a challenge but I just had to bring it home.
"It was my race to lose today and I did the job."

MotoGP will now head for the first of three consecutive flyaway races, at Motegi (Japan) at the end of this month, before returning to Spain for the Valencia season finale.