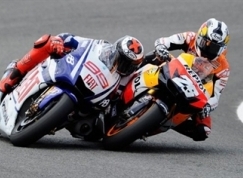 The decision was taken to focus on existing grand prix teams when considering who to include on next year's MotoGP grid.

The FIM has confirmed six new teams have been offered a contract of participation with IRTA for the 2012 MotoGP World Championship, in addition to the current competitors. Among those to gain an entry include Marc VDS Racing – which has been helping Suter develop a 'Moto1' chassis – current Moto2 leaders Kiefer Racing and Andrea Iannone's Speed Master team. A short statement from the governing body confirmed that it received more applications than places available, prompting them to focus on those already competing at grand prix level in Moto2 during the selection process.

The six teams to secure an entry are:

However, a statement that read 'the offer is with respect to one rider only and is subject to the submission of their final plans', suggests these positions remain fairly provisional.

New Year's Eve celebrations usher in 2012 across the world