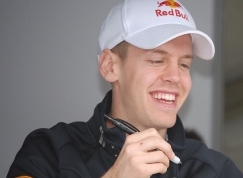 Jarno Trulli took second place for the Japanese Toyota team, whilst his teammate Timo Glock was injured in a qualifying accident on Saturday and withdrew from the race on Sunday morning.

Lewis Hamilton, winner of the previous Grand Prix at Singapore, closed the podium for McLaren having started from third place on the grid.

The two Brawns of the championship leaders, Rubens Barrichello and Jenson Button, closed the top eight.

In other racing news this week, Fernando Alonso will move from Renault to Ferrari next season. His contract will last for three years with an option to continue. Alonso was very enthusiastic about his decision, confessing in an interview that "it would be even more special to win a championship with Ferrari... All drivers dream one day of driving for Ferrari and this dream has come true for me. I'm extremely happy and I'm ready for the challenge in 2010!". Räikkönen is now free to choose another team. Alonso's teammate would be Felipe Massa who was injured this year during the Hungarian GP qualifying. Massa was forced to retire at the end of this F1 season.