Russian pilot climbs on Formula 1 podium for the first time 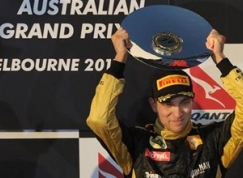 The Russian Formula 1 driver, Vitaly Petrov (Lotus Renault team) has become the first ever Russian to ascend the Formula 1 podium after finishing third at the season-opening Australian Grand Prix, where the winner was Sebastian Vettel (Red Bull).

Petrov, the first Russian driver in of Formula 1, started sixth and finished third. Second was the British driver Lewis Hamilton of McLaren-Mercedes.

Jezza 16-04-2011 10:56 In other up to date sports news, Spain win the Foodtball World Cup, Red Rum wins the Grand National, and i-marbella profiles up and coming cricketer WC Grace
0

Ferrari's, Lamborghini's and Mercedes in multi-million dollar crash in Japan (1)

Presentation of the new Mercedes SL in Marbella (1)