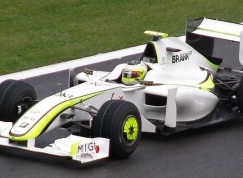 Brazilian lead the race after a McLaren team carried out a second pit-stop for Lewis Hamilton, who led the race from the pole position. Podium was closed by Kimi Räikkönen on a Ferrari car after Hamilton crashed dramatically on the last lap chasing Button too hard.

Brawn executed a one pit-stop strategy that allowed them to save time they would lose otherwise by competing with the KERS-equipped cars in front of them on the grid.

Once again the race showed a surprising result for the Force India as Adrian Sutil chasing Räikkönen. Starting from the second place on the start Sutil was quickly passed by the KERS-equipped Räikkönen's car in the first corner as in the previous race he overtook the pole-sitter Giancarlo Fisichella, who is now racing for Ferrari.

Other Force India driver Vitantonio Liuzzi also surprised the spectators by qualifying 7th on Saturday, but he retired on a lap 22 when his transmission broke.

Fernando Alonso pushed hard throughout the race to finish fifth and score 4 more points for Renault, ahead of McLaren of Heikki Kovalainen.

Nick Heidfeld managed to get two points for BMW Sauber after starting from the back of the grid as far as 15th. Championship third contender Sebastian Vettel today closed the starting grid with one point for Red Bull Racing, while Mark Webber was out of the race after pushed by Robert Kubica in his car rear.

Italian Fisichella was very emotional after he borrowed Felipe Massa's vacant place from Luca Badoer by joining the Italian team. He finished 9th.

Jenson Button strengthen his lead in the Championship with 80 points total. His team-mate is 2 points closer to him after this race with 66 points. Vettel is 12 points behind Barrichello and Webber 14.5 points with Räikkönen only half the points of Button. The lead Constructor is still the Brawn team with 146. Red Bull 40.5 points behind, other far behind.